Home Who are we?

Since the 80th the of last century, awakened Asia has taken a millennium vigorous change. Though the truth that Japan had taken historical vigorous change for its emergence since the 19th century, and having followed the Japanese mirror , such economies as Korea, Singapore, Hong Kong, Taiwan, Thailand, etc. managed “taking off to the fast growth sky” during the second half of the 20th century. Even though, only since the two giants representing for the biggest civilizations in Asia i.e. China and India were stepping into social reforms and open-door policy in the 1980’ and the 1990’ this Asia’s millennium change could reach trans-continental and world scales.

During a half of man lifetime, Asia managed to do a marvelous thing that increased three times of its number among the biggest economies on the planet. Up today, in 2017, Asia holds three among the world’s six economic giants, i.e. China, Japan and India. The other three positions belong to two continents, USA in America, and Germany and UK in Europe. It is not a myth if forecast that in one day later one of the two positions in Europe might be taken over by a fourth certain Asian economy in the next 20 years – ASEAN as a single economic community or Korea as an economic nation? Even though this scenario won’t happen, but with the fastest growth rate of the next emerging economies in Asia occurres, the next millennium change must happen definitely. It is the Asia Era, or together with a couple of countries from the Eastern coast of the Pacific and Russia, an Asia-Pacific Century will be born for sure.

Given holding three among six or four among six leading positions in the world economy, either alone or together with powers from America and Russia forwarding to lead the world main stream in development in the 21st Century, then Asia needs one thing even though. It is its economic collaboration with other continents and nations. In this process there are three relationhips either “trans” or “inter” continental, such as Trans-Asian, Inter-Eurasian, Trans-Pacific must play a pivotal role. Asia needs professional business matchmaking services in all the three relationhips. There is no doubt about it.

Ten years after coming out from a brutal war, in 1986 Vietnam joined the process of the great change in Asia starting from a historical Renovation Movement. Located in between these two biggest civilizations in Asia and on the peninsular named the same two civilizations’ names, Indochina Peninsular, for the last 30 years Vietnam has not been shameful before pioneer nations. The economic growth rate of Vietnam has been fastest in Southeast Asia behind only China and India. It is to confirm that both on geo-economics and economic practically growth, Vietnam is among the economies that hold the best conditions to take part in matchmaking of business opportunities in Asia.

Having understood this perspectives and opportunities, The Asia Business Matchmaking Company Ltd., – Asiabuma – born in March 2017 by a retired senior diplomat with economic and business mind, ambassador, master of economics Vu Son Thuy – has the goal to contribute to business exchanging among Asian enterprises and between Asian enterprises and that from other continents, in which the priority is given to business matchmaking between enterprises from Vietnam and Asia, America and Europe.

However, because of limited resources and based on the principle of work for highest efficiency, and during the first stage, the Asiabuma Ltd. will restrain itself in some activities of Asia’s huge matchmaking process. The company will provide business matchmaking service in six sectors such as Urban Infrastructure, Real Estate, Tourism, Manufacture, IT, and Healthcare. The Asiabuma Ltd. wishes to share opportunities with organizations and individuals who have common goal of mutual beneficial collaboration for prosperity and sustainable development of every joining party.

Because of the changes in world geopolitics and geoeconomics during the second half of 20th century and the first decades of 21st century, Asia-Pacific in general and Asia in particular are emerging as the world’s center determining “game rules” and economic exchange in the 21st century. Along the Asia’s emergence, Asian economies must excelerate economis exchanges between them with other continents, especially the America and Europe. Having acknowleadged of this perspective, the Asia Business Matchmaking Company Ltd. (Asiabuma) has come into life in order not missing the valuabale chance of growing prosperity.

By providing service of matchmaking between companies who require economic exchanges, the Asiabuma Ltd. actively participates in the creation of economic efficient collaboration in Asia paralell with creation of new jobs both in Asian and other continents’ economies.

The Asiabuma follows a business philosophy of “Providing its best vervice with reasonable price targeting satisfaction, wining and prosperity of each party”. 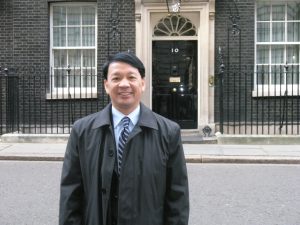 * Lifetime Ambassador of Vietnam since 2012

* Visited 42 countries of all five continents. Retired from Government service and started doing business since 2017.

◊ IT and PR Experts

◊ Network with all big cities in Vietnam

◊ Network with 18 Economies of Asia, America and Europe